DAYLIGHTING IN THE HISTORY OF ARCHITECTURE – part II

HomeDAYLIGHTING IN THE HISTORY OF ARCHITECTURE – part II

Image #1 – satellite view of the site 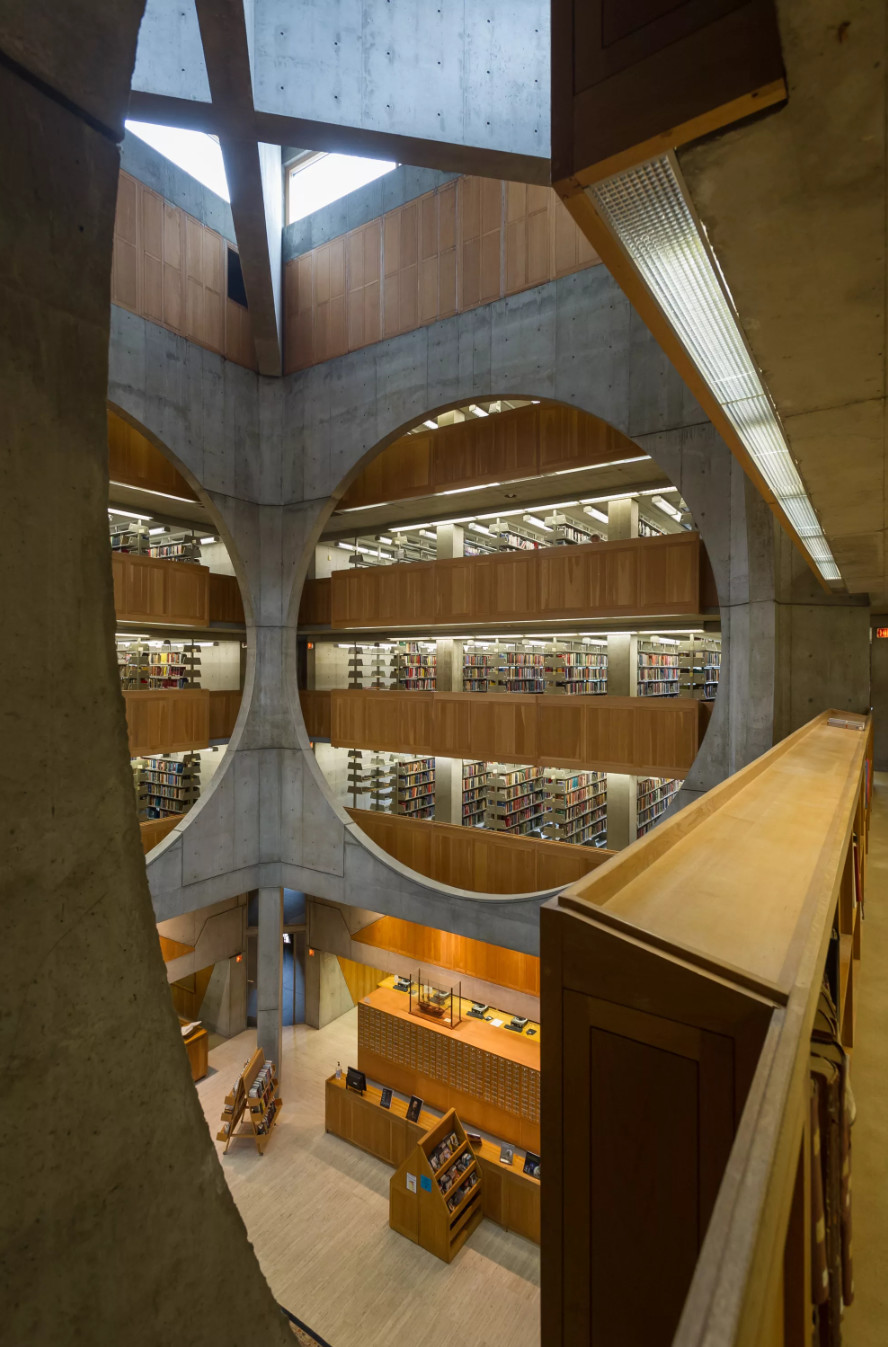 With this article KAiros LIghting + SOund DEsign is conducting via software a daylighting analysis on one of the most beautiful examples of a library: the legendary Phillips Exeter Academy Library designed by Louis I. Kahn in Exeter NH, US, during the years 1965-71. Interesting note about the project, despite the extra 10 months needed for the construction, the total cost of the project was only $8,000 over the original project cost of $3,360,575, just a 0,2% more than the initial budget. We could say today that Kahn was a very concrete architect! 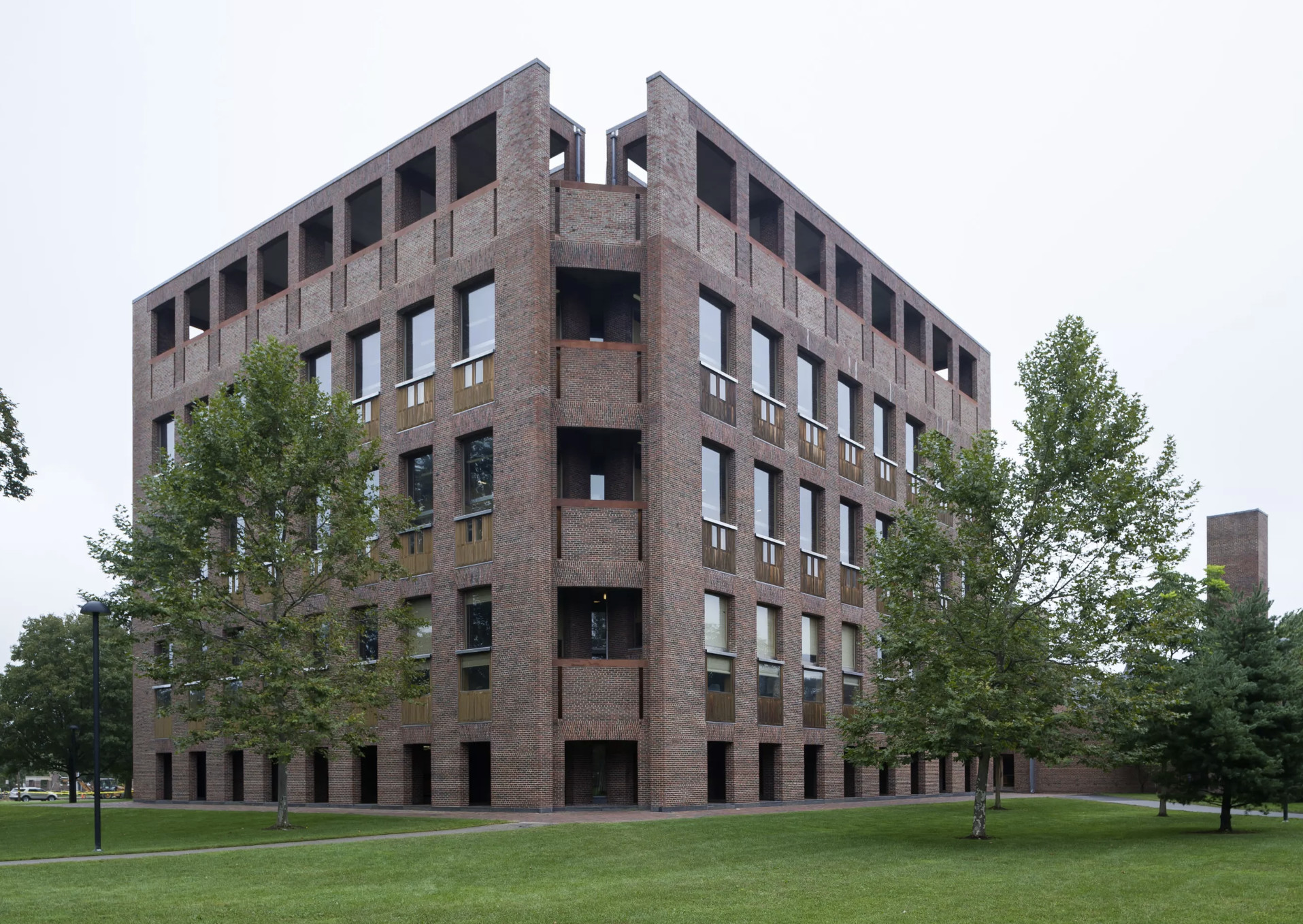 Now we can come into the daylighting subject, we proceed with an operation that is possible only thanks to the computational assets of our century: not a horizontal section and not even a vertical one, but a diagonal section instead. This is not a way to show off all the RAM GB of the hardware that did the simulation, while it is a new possibility to have a look inside a bit of every horizontal floor from the 7th (rooftop) to the 5th looking at the same time inside the central void. The model is oriented north-south. Clear sky.

In the Video #1 we investigate the luminance values in the building. 8:00 am – 5:00 pm. We need to explain for more clarity, that every luminance value in this paper, it is always calculated with the look of the hypothetical observer directly perpendicular to the surface analyzed.Rooftop luminance levels: very high-ones due to the brick, concrete and metal surfaces exposed directly to solar radiation. 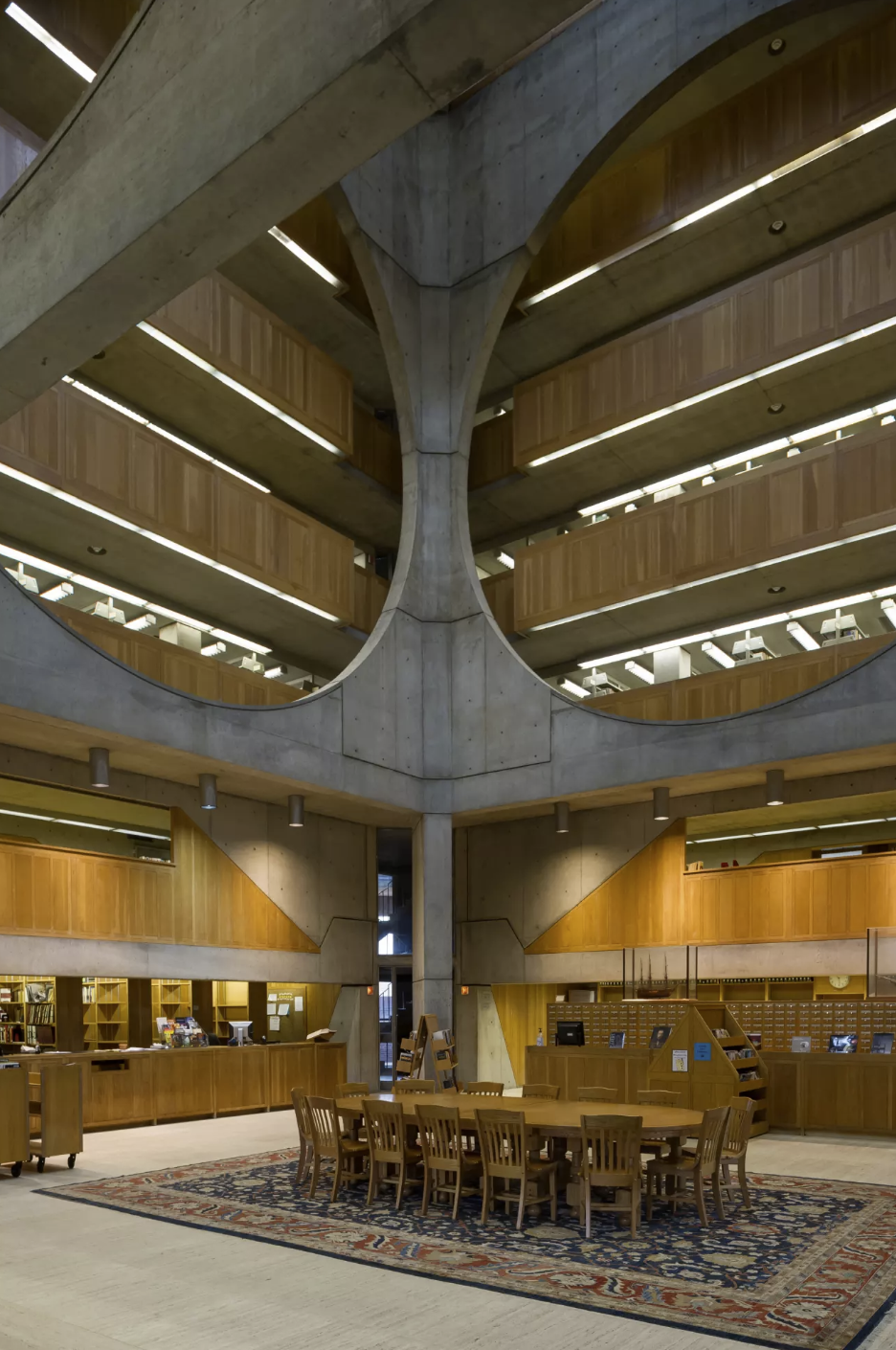 The central void is the farthest points from the façade windows of each floor: the places where we have a minimum amount of direct light reach: very low values, the lighting Kahn’s machine is working well from the emotional point of view, it is working less from the natural lighting side.What we naturally see from the image #2 and #5 is that every library balcony has a very refined “custom lighting machine”, that at the same time casts a functional light on the books which lean on the sloped shelf and contribute with a diffused fraction to the general lighting of the void.We can notice too that under the overhang of the main concrete “round beam structure” there is another array of five (you can see only three of them in this photo) lighting fixtures which light up a dark area. All these fixtures are obviously functional during the night, so they must be there as a good part of the project. The hypothesis of who is writing is that they are essential to this design of the building, even during a sunny equinox day!

What we read from the values in the central void of the building is a presence of a “light in the darkness” which is similar to the use of light in the previous article related to Tadao Ando’s “Church of Light”. Light as a theatre, light as a clock, light as Kahn said “presence”, light as poetry but we can say through data, not a functional light, not enough to read in this inner space. What we can see from the cross section simulation is that the only moments in which there is a full light availability is during the winter’s early morning and afternoons (8am and 3pm) when we have a very low sun which penetrates from the south-west façade. 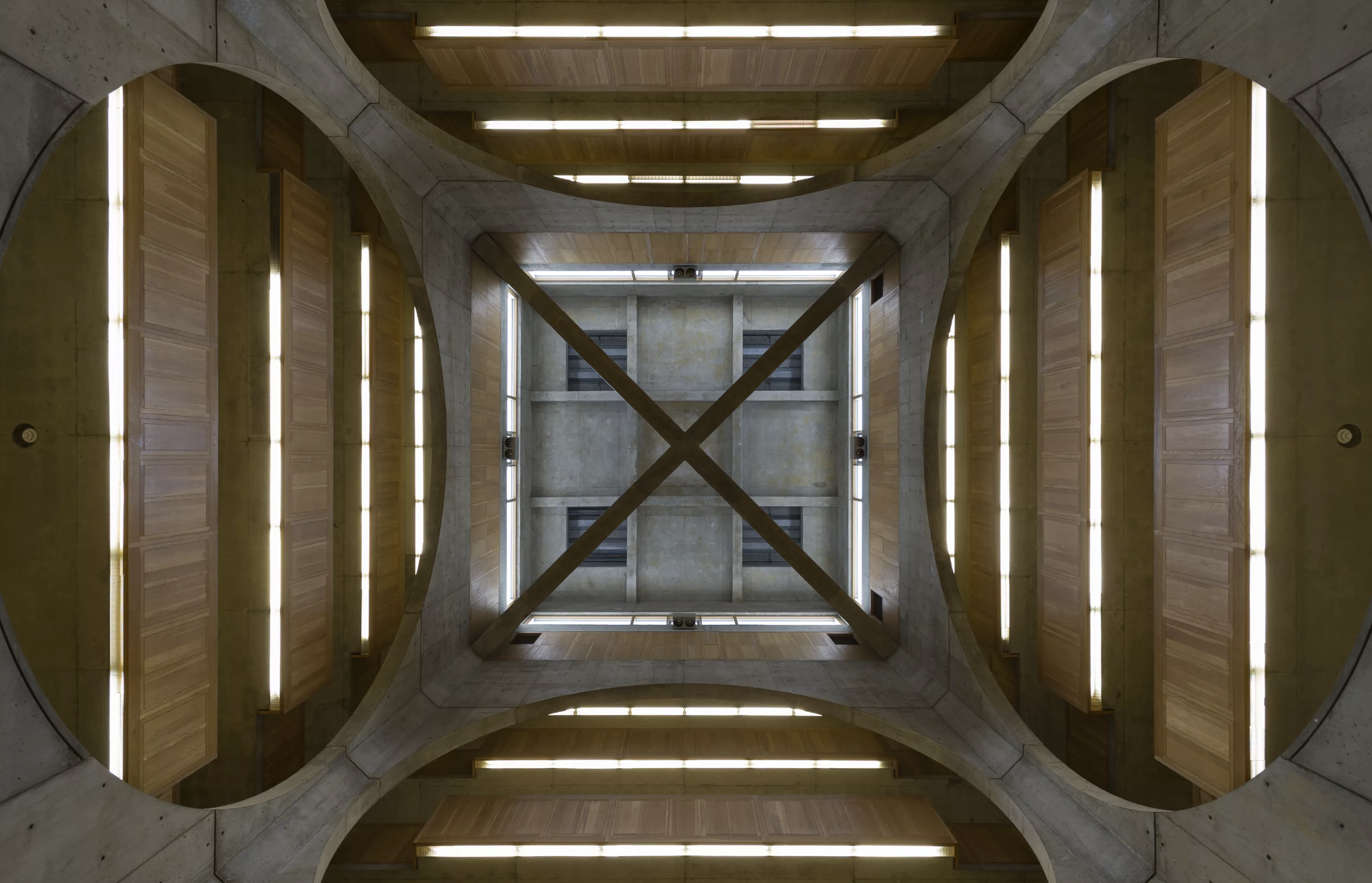 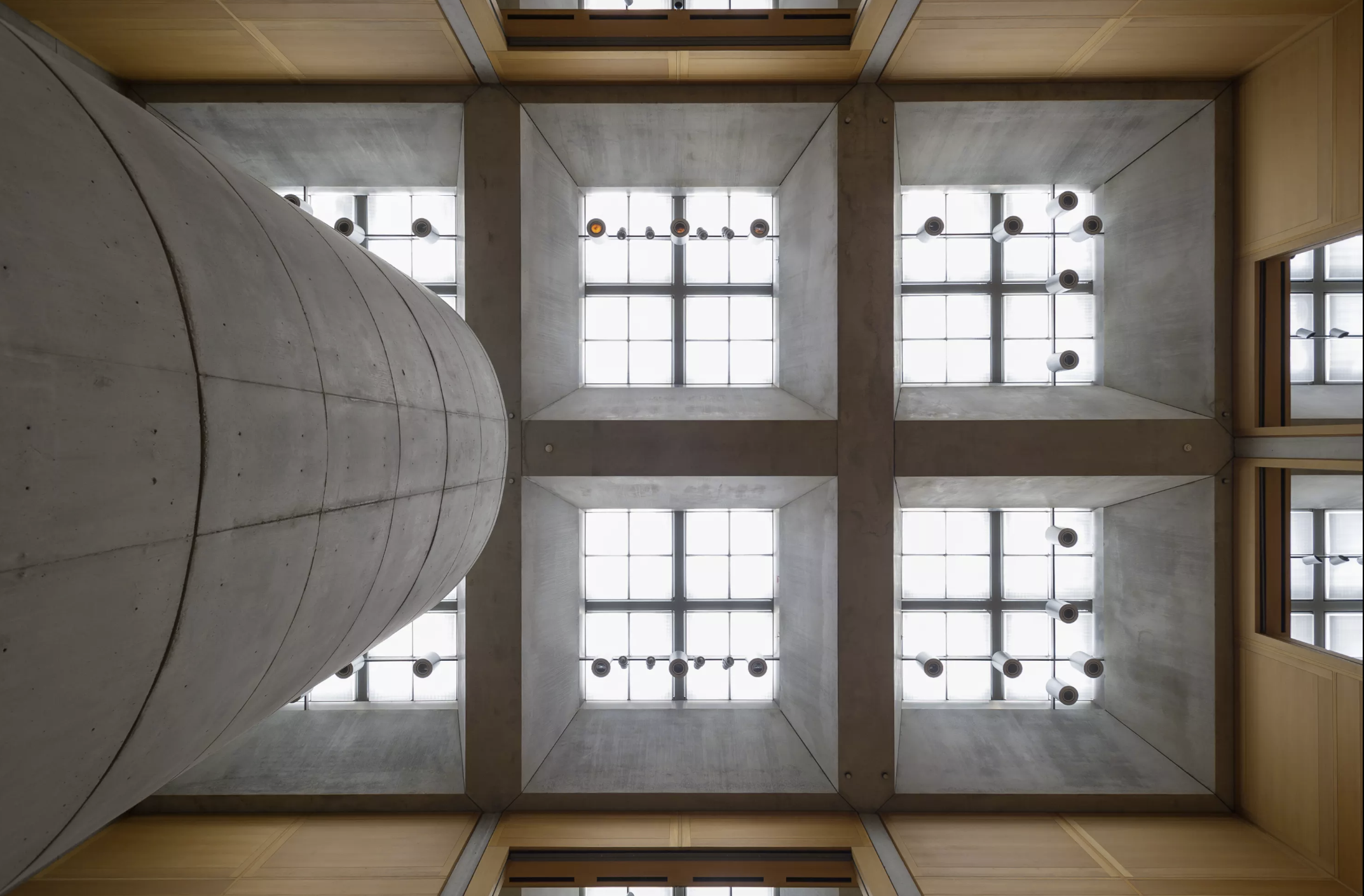 Here we show a comparison between two different projects of Louis Kahn: the library object of our analysis and the last Kahn project, a museum, the Yale Center for British Art. A similar problem/opportunity is represented by the rooftop. To open or not to open a skylight in order to have a more abundant amount of inner natural light? In the latter Kahn opened-up a wide surface of the rooftop through an array of skylights, notwithstanding the latter is a museum with all the problem of art conservation and notwithstanding the fact that the Yale Center had a void height of 9m against a much deeper one at Exeter’s Library (24m). The impression of who is writing is that Kahn had in this top termination a design path which he preferred not to follow, while years after he decided to pursue it in his last project, opening up the rooftop and believing in a more radical solution of a pure skylight at the Yale Center.So now let’s try to implement nine skylights on the rooftop just for investigation purposes and have a look at the results. 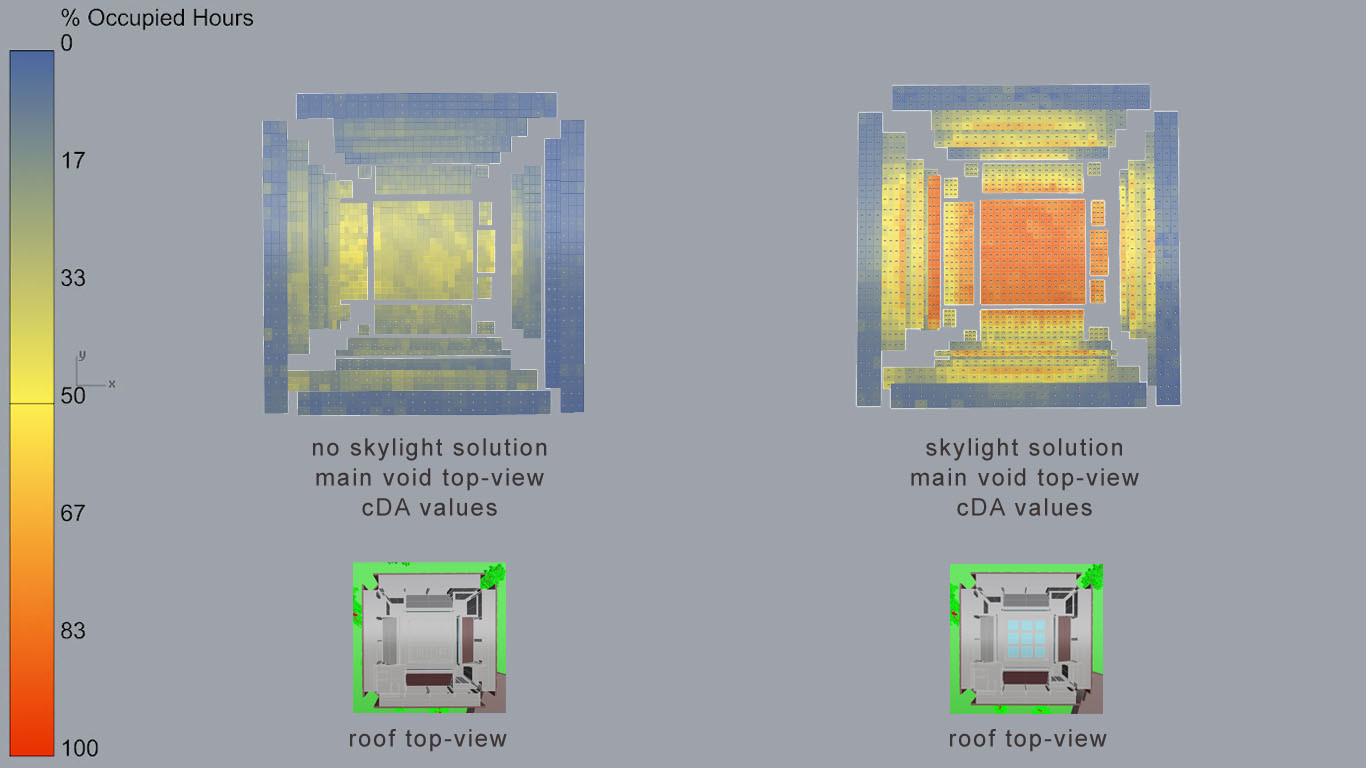 These results underline the idea that an array of nine skylights on the top of the building would donate an area of “continuous daylighting autonomy” to the core of the building which at this moment it reaches the standards due mainly to the electric lighting. This consideration now is only orientative because, to inform a complete decision about what is better and in which quantity, we need to calculate too the heat amount that these skylights are bringing in, then taking into consideration the energy savings from daylighting and the increased costs of ventilation, then we can judge the convenience of this operation.In a further article about this building, we will define the right amount of glazed square meter on the roof-top, which could have donated the daylighting autonomy to this main void respecting the thermic balances of the system. This amount is a value, as previously said, which is somewhere in the middle between the two extremes: totally open roof-top and totally opaque roof-top. Science and technology will provide us intelligent and dynamic shading systems to maximize the amount of light coming into the building, minimizing at the same time the heat entering from the skylights. 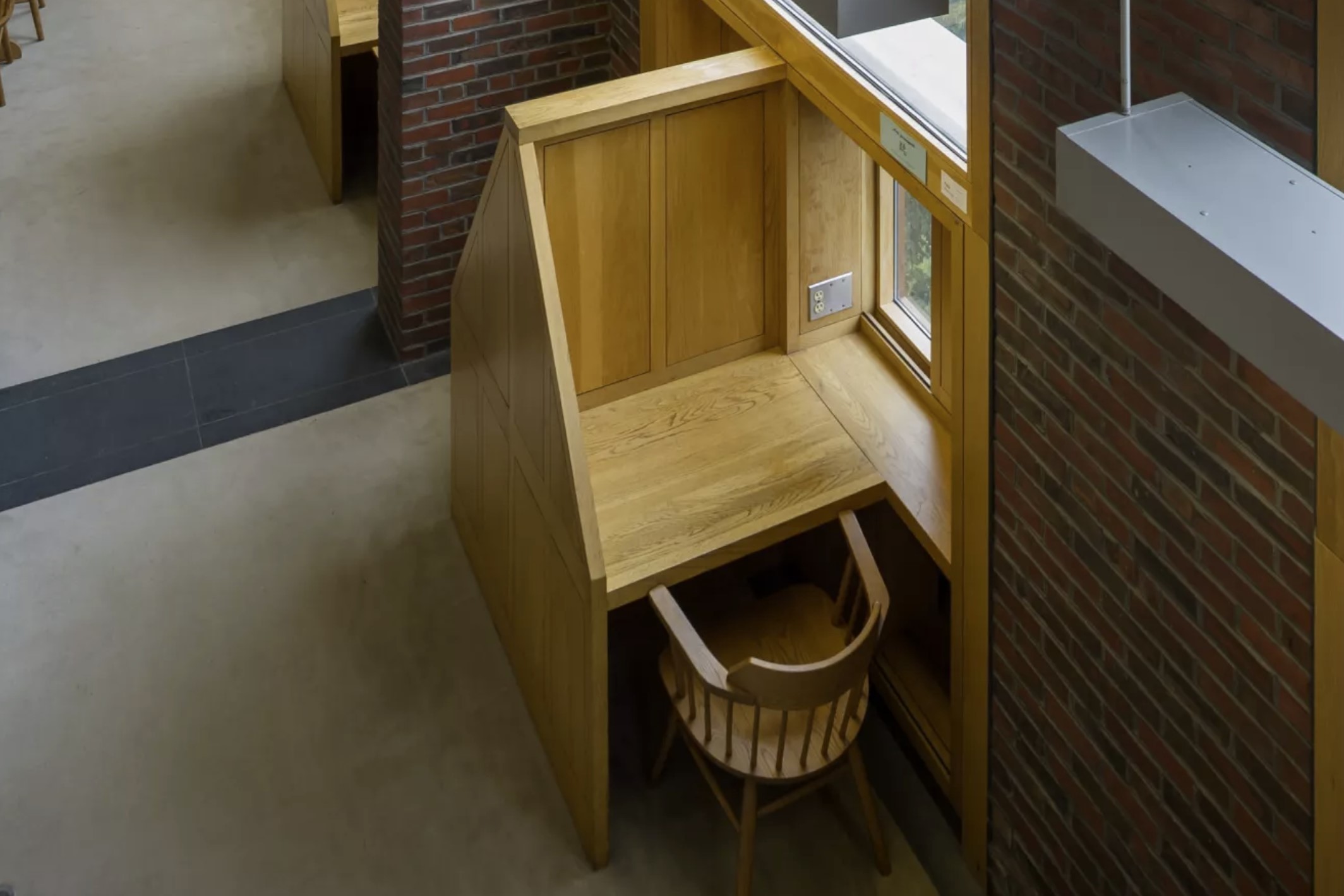 But then not anything is doomed, because Kahn was very keen on details and designed also a sliding window shutter for every desk, so to use during these hot and sunny hours only the diffuse contribution of the wide upper windows. Let’s have a look at what happens to illuminance values.

So just sliding the shutters of the image #8 completely closed, we achieve the expected quantity of light on the desks. From the incident light point of view, take a look at image #9, we downgrade on de reading-desks surfaces from 23000 lux (image #9 on the left) to about 1900 lux (image #9 on the right). If you want to have an idea of the quantity of light that this wooden furniture reflects, we downgrade from 4300 cd/m2 in the opened shutters scenario to the 360 cd/m2 : a regardful drop only obtained with a mechanical beautiful simple old-fashioned design.

In this video #4 we analyze the shadow fall onto the surrounding park of the building, the lighting effect at the roof-top level and we can appreciate the direct light fall into the building inner façade. After having taken three “photographs” at 8:00 am, 12:00 am, 5:00 pm of the illuminance and luminance values, we focus on a set of grid-based analysis throughout the year called continuous Daylighting Autonomy (cDA), Daylight Factor (DF) and Useful Daylight Illuminance (UDI). It is easily comprehensible that this space totally works as “natural lighting machine”, the values could be a 5-8% better if we would have decided not to put daylighting sensor between the long and tight bookshelves, where the photons need to bumps several times before to reach the sensor we placed.

Indeed a great part of the continuous Daylighting Autonomy area that is not fulfilled it resides here at the ground floor. Extremely deep room, which has too a screen device in front represented by the ground floor porch and half of the inter-floor height compared the other floor.This building has been a fantastic journey of complexity to approach it, studying it and learn to know it. The Phillips Exeter Academy Library has given us the hints for one more article about it. Richness and light are the keywords to describe this architecture of Louis I. Kahn, which we think they made worth this space a long long journey to visit it.

acknowledgements: special thanks for the 3D modellation to Kristiyan Lyubenov and for the kind concession of the images to Xavier de Jauréguiberry.

Archives
Dear BiM passionate, do you know how to build a real I-girder STEEL BRIDGE? We will explain it on a regular basis on our NEWSLETTER. The model you are now about to receive within your NEWSLETTER SUBSCRIPTION has been designed during 135 hours and has a total value of 1580€, for you free only until: 2022-01-28.SUBSCRIBE Kalisode Network NEWSLETTER !
+ +
Manage Cookie Consent
We use cookies to optimise our website and our service.
Manage options Manage services Manage vendors Read more about these purposes
View preferences
{title} {title} {title}